The ARIA, which was released this June, can easily enter this year's successful list of great phones due to the combination of many properties.

In fact, we were not surprised to see this model, especially after the release of the Incredible and HD MINI- In a way the Aria is the HD mini’s twin brother from the HTC’s Android series.

In addition HTC wanted, for a while now to introduce a device for the leading GSM network in the states (AT&T) without really competing against the Iphone. 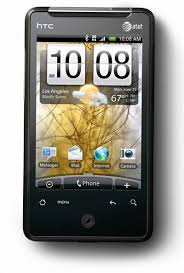 [Sponsored link] Get a Aria cell phone for free.


The Aria has a different niche - smart but at the same small and cheap.

This is a small device with a 3.2“ touch screen. The device is closely similar to HTC's HD mini but with custom changes for the Android system. In fact, we can see four touch keys (or touch surfaces) designed the same as it was designed in the INCREDIBLE; same with the optical button on the bottom, this button is as useful as the trackball that was introduced in previous models- not useful at all but still exists!

We can see that the arrangement stayed pretty much the same. On the bottom we can see the keys - "Home", "Menu" , "Back", and "search “. On the top we can find the metal power button which is a nice change in compare to the plastic button on the EVO device.


The whole front of the device is a large screen (similar to the Iphone).The back cover is actually removable and it is made of rubberized plastic which is comfortable to the touch.

Actually the antenna is integrated into the “Backdoor” and this contributes to the isolation of the antenna. The antenna is not exposed so there is no degradation once you hold it “the wrong way”. The only drawback is that the phone will be without coverage until we closed the lid.

Once we take a look under the hood we can spot the battery, SIM card and flash card, I have to admit that the yellow color was a good choice, it gives a sense of luxury and cleanliness. The phone supports up to 32 GB on flash.


A couple of things that also could be found are the: headphone 4.5 cm jack on the top and a mini USB port on bottom. We can also find a 5 MP camera (no flash), a large speaker and at the top left we can identify the light indicator.

This is very comfortable device despite its small size. I felt comfortable putting it in my pocket and didn’t feel that it could break easily (although we are looking at a broken instrument).


The Aria has a small screen resolution of 480X320 HVGA. This is an LCD and not AMOLED as we got used to see in HTC’s devices. In part, Samsung is responsible for that by not being able to provide the amount of screens required for HTC. The alternative - Sony's LCD screens.

The Screen itself takes about 90 percent of the front and covered with a thick glass. The screen is captive and supports multi touch.

This is a Crisp color screen, images from the Internet and the camera seems clear. Although I expected less quality from the LCD I could even clearly see the menus in direct sunlight.

The touch screen scrolling performs superbly, it is smooth and steady. Although it is relatively a slower phone (600 MHZ), the experience is not different from my own Nexus One that has SNAPDRAGON processor. After playing with the interface for a while I can say with confidence HTC did a great job working on the interface reaction. 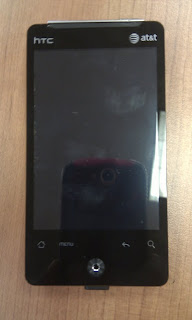 In general the device works quickly without delays, the reason for that might be the fact that I did not install a lot of applications on it or perhaps because of the amount of the ram (384). Anyway, I don’t think that will change much if I add some more apks.

Although the device is small I was content with the HTC keyboard which was large enough to type quickly and easily. To my surprise the keyboard was actually comfortable.

The system works on Android 2.1 version and it is relatively stable. Obviously there is the addition of HTC’s SENSE UI that adds comfort and use.

I would like to point out that the big SENSE UI widgets are especially useful, seems that precisely because they are deployed on all of the screens, their effectiveness actually increased on this device.

HTC provides a convenient player that is easy to use, no wonder that most of the ROM developers try to port it to other android devices.

The sound volume and quality are pretty decent and the large speaker can play the musing loudly although without good quality and some time discordant- an unsettling fact for new users.

The video player looks good, it is quite possible to see small films on the Aria screen. The speaker also works well. A big drawback is the lack of support for DIVX but it can be fixed by downloading the right APK from the market.

This model comes with a radio but unfortunately it works lousy. Although the device finds the stations it cannot play them without interruption. In fact, a station that sounds perfect in my car could not be reasonably played by the device.

The Aria has a 5 MP camera that takes good quality pictures. The camera interface is easy to understand and most of the pictures come out sharp with excellent contrast.

Auto focus works great and additional options (such as the geo tagging and face recognition) makes the photography experience fun.

Actually the device’s camcorder gives good results; it encodes the movies into MP4 files in a VGA resolution which is not bad.

It’s too bad that the camera does not have flash, in a way the great camera cannot be really used anywhere and this is a big drawback when thinking about Aria’s camera. Another small drawback is the lack of HD recording that can be found in nearly every new android phone out there.

There isn’t really a change on this field and web surfing looks and feels pretty standard.

The device supports HSPA+ Speeds of 7.2 MPS. Aria’s browsing is fast but it is a bit uneasy to use the web browser due to the size of the phone, I used the pinching mechanism more than usually, but overall it's was not that bad. The average user will probably get used to it pretty fast.

One thing that really bothered me is the lack of a bookmarks button of the browsing window, being used to implement them in the Nexus One I was constantly looking on where to push.

I just want to add that flash is not available on this version and it will be available once HTC decides to upgrade the Aria to 2.2.

The Aria has a 1200 mAh battery but it seems that the device does not need a lot of energy, in fact I charged it for more than an hour for a full battery and did not noticed a dramatic battery power lose when I used it.

According to different online resources the phone can operate as long as the EVO can.
So it seems that the battery is reasonable (unfortunately not have time to check it mysel

I love, love, love this phone ... I must admit that the device is sexy. I liked the feel, the size and how it works.

The design is simple and the easy interface really enhances the experience.

Nevertheless I cannot shake the feeling that this is a “weaker “that might not give me all the features I require. A strong battery might be needed when you are using energy costly features (As tethering).

I would like also to get the missing flash for the camera and HD recording. As someone who likes to take pictures with his phone I see a big disadvantage.

In addition to the above I would like to see some improvement in several areas:

- Bring back the hardware buttons.
- Stereophonic speakers.
- Support for a removable flash card.

Overall, I will definitely recommend this device for people who do not like large bulky sets but still want a smart and cheap phone (relatively).

HTC has proven that you can actually get minimum size SMARTPHONE.


Fun picture of a broken Aria: 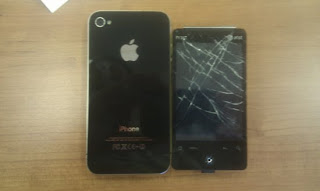 The phone was provided by www.Cellularstream.com


[Sponsored link] Check our section of Android phones
on cellularstream.com
Email ThisBlogThis!Share to TwitterShare to FacebookShare to Pinterest
Posted by Boris B at 4:35 PM